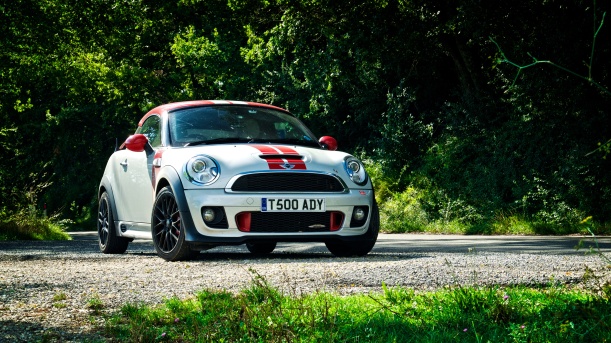 A long while back we installed the GP rear diffuser on SilverBeast. This improves the aerodynamics under the car and gives a more appealing look to the rear of the car either side of the exhaust.

It is because of this visual improvement, giving the car a beefier, sportier and more purposeful look, that this modification has been so popular.

However, without the engine under tray from the GP2  also being fitted then this modification in truth is purely aesthetic and gives no aerodynamic benefit at all. However, match it to the engine undertray and you have the same aerodynamic set up under the car as the GP 2 and this does make a difference.

Above is what SiverBeast looked like before the engine under tray was added and below is how it looks with it installed.

Yep no difference can be seen at all unless you crawl under the engine bay. This is why there has been a much lower take up on having the under tray fitted, compared to take up of the rear diffuser as a modification.

In terms of aerodynamic handling I doubt I drive the car hard enough to notice much difference. That is the honest answer but having spotted other signifcant differences, I don’t doubt that is does work in making improvements in the handling.

Two things we have noticed. First, the noise. This car not quiet and a lot of the noise comes from road noise under the car. The car is a lot noisier than an R56. You had to either talk or listen to the radio but not both. Now, with the undertray fitted, you can have the radio on and still be able to talk. Now we can hear the engine more which is a much better noise than the road noise that dominated before. Also we can pick up the windscreen windnoise which again was drowned out by the road noise from below. For these benefits alone we feel the under tray has been a worthwhile benefit.

Secondly, we have a better fuel consumption. We are now getting an extra 2 to 3 miles per gallon on what we got before. I kid you not here.

So there you have it the GP2 under tray. It works!

All of our cars have common features, they all have a 500 on their number plate and they all have their own number BP500 -1, 2, 3 and 4. BP for Beastie and peanut, 500 as on the number plate and 1,2,3 or 4 depending on which car it is.. The MINIs all have one more common feature, they all have A-panels in the same colour as the roof. Cooper Beast is red with a white roof and white A-Panels, ClubBeast is Pepper white with a black roof and A-Panels and now finally SilverBeast has the look too, being silver white with a red roof and A-panels. Just in time for our forthcoming roadtrip to France and Italy, where we drive the 1000 mile route of the Mille Miglia road race. END_OF_DOCUMENT_TOKEN_TO_BE_REPLACED

It has been a few years since we last went to the Himley Hall MINI meet and as we have always enjoyed the show it was time we went again. We went with YAM MINI, which gave us a chance to catch up again with some old friends from the MINI community whom we had not seen for a while, the Gidfather, SMonster, Tweedbean, Supermario, to name but a few. As always it is this opportunity to renew old friendships that makes these MINI events such fun. END_OF_DOCUMENT_TOKEN_TO_BE_REPLACED

SilverBeast has had his red Joseph Ducts fitted in the front bumper and a diffuser fitted at the rear.  The next step will be his red A-panels and his private plate as he readies for his first major European tour, to the South of France and on to Italy to retrace the route of the Mille Miglia. With the sun shining so brightly and the jet streams looking so good in the blue sky, I could not resist a quick photo shoot of the Coupé, to show off his ducts and diffuser. END_OF_DOCUMENT_TOKEN_TO_BE_REPLACED

Today we fitted the GP diffuser to our MINI Coupé SilverBeast and we wanted to share how we did it, as it could be a big help if you are thinking about doing this. END_OF_DOCUMENT_TOKEN_TO_BE_REPLACED

We watched James Martin compete in the Mille Miglia in a programme, shown on BBC2 way back in January 2009. We were inspired by the documentary and immediately made a promise to ourselves to see the race and one day drive the route. The programme also mentioned Stirling Moss’ record breaking time to complete the Mille Miglia in 1955. A 1000 miles from Brescia to Rome and back at an average speed of 98.53 mph in 1955 on normal roads! To me the most amazing achievement in Motor sport history. This one single fact sums up the very essence of this race and its importance in Motorsport history.  END_OF_DOCUMENT_TOKEN_TO_BE_REPLACED

This was a static MINI get together with some traders and other MINIs to admire and an opportunity to pick up tips and get ideas for future mods that we might fancy. We stayed over at my Mum’s in Buckley the night before and with an early start, we planned to be at the meet before 9.00am. We knew there were a number of other groups travelling to the show but we had made no definite plans to meet up with any of them to convoy to the show, we just hoped that we would find them on the way. END_OF_DOCUMENT_TOKEN_TO_BE_REPLACED

We had a fancy to mod our new coupé a little and thought we would add some red brakes ducts to his features, instead of the black ones he was born with.

A simple job, just remove the bumper and change the ducts. We have changed bumpers before on CooperBeast, a bit time consuming yes, but not impossible.  So yes let’s have a go! END_OF_DOCUMENT_TOKEN_TO_BE_REPLACED

Quite by chance we discovered that our mates Aston and Deb were going to the Peaks MINI Run organised by the Midland Mini League and as the weather looked glorious at last, we could enjoy an afternoon in Buxton the day before book a hotel for the saturday night and make a full weekend of it. Poignantly was 10 years ago  in May 2003 that we did our first MINI run, which happened to be the Peaks Run, so it seemed apt that we should go back to the Peak District ten years later to do another Peaks MINI run! END_OF_DOCUMENT_TOKEN_TO_BE_REPLACED

This year we went to The Brooklands MINI Day with The Surrey NEW MINI Club and despite the perishingly cold weather we had a great day.  We met in a nearby Tesco car park so that we could all convoy onto the stand together and this worked very well and gave us a chance to meet some old friends and make one or two new ones. As always it was inspiring seeing other people’s MINIs and we came away with a few ideas on what to do with SilverBeast. Great fun and all part of the joy of the MINI scene. END_OF_DOCUMENT_TOKEN_TO_BE_REPLACED