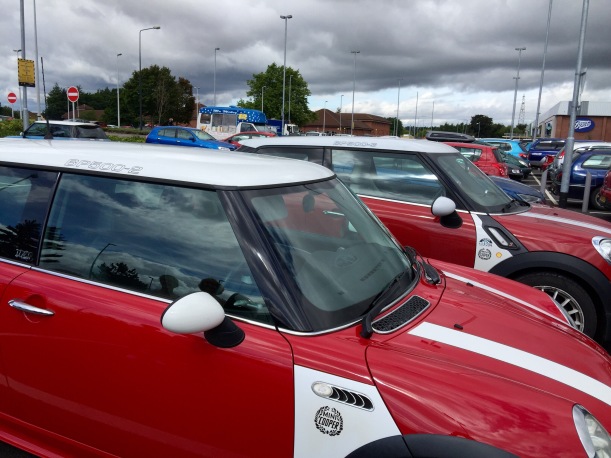 These two don’t meet up very often but when they do you can see where PaceBeast’s styling cues have come from. This pair looks so good together.

We have had our MINI Cooper SD Paceman (PaceBeast) for just over a year now and what a year that has been for PaceBeast. In that time he has done no less than 5 European Road Trips. Rightly then this is a right of passage and he has really earned his GT Grand Tourer badge.

His first trip was to Le Mans for the 2014 Le Mans Classic where he performed faultlessly even in a monumentally evil thunderstorm one day as we returned from Le Mans to our hotel in Bagnoles.

Towards the end of July he was back in France this time for a longer trip to the South of France. 700 miles of motorway from Calais  to St Tropez proved that he really is a comfortable motorway cruiser – a true GT. He also demonstrated a taste for the finer things in life as he per used the local vineyards in the South of France

His next foray abroad was  to Paris in October of 2014 for the Motorshow where we got to admire the beautiful MINI Superleggera. Again he served well, handling the Paris traffic with aplomb, the semi command driving position proving quite a benefit.

After Paris he did a short European trip to Bruges at the end of November for the Christmas markets where again he served us well with his ample luggage space which came in useful for our Christmas shopping. 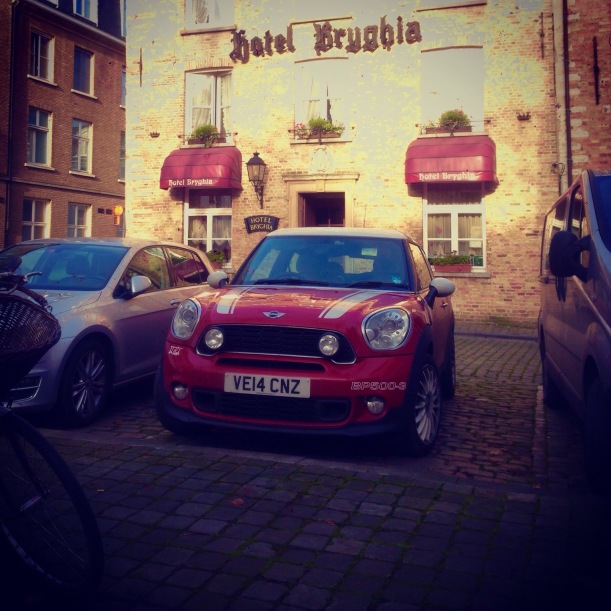 In  2015 our first European adventure was Venice in February  but no accolades for PaceBeast there as we flew for that one. May however, saw a big drive to the South of France and as with the last trip to the south he did sterling service.

So there you go a worthy wearer of the GT badge. 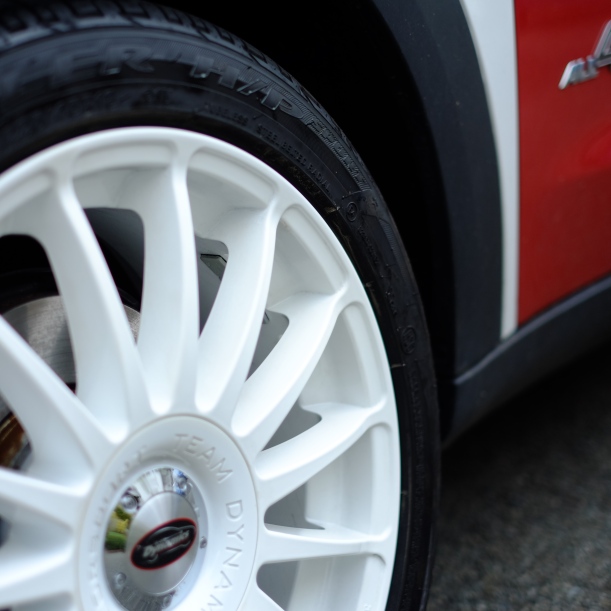 When we bought PaceBeast we knew from the word go how we wanted it to look. basically our first MINI known as CooperBeast was clothed red and white with white alloys and white A-panels and we wanted to replicate him.

I think we are close now and it is in the detail that we have achieved this. We deliberately omitted tinted windows and  intentionally kept the alloys at 18 inch rather than go 19 or 20 inch on rubber band tyres. This will jar to the eyes of the modernists who want the wheel to  fill the arch and the vehicle to look slammed but remember that first it is a functioning and very useable four wheel drive and secondly, we are chasing a retro look and to do that we needed to keep the fatter tyres. A bonus for us is that it is a very comfortable cruiser – by far the most refined MINI we have ever owned. The alloys by the way our Team Dynamics Monza Type Rs and were supplied by wheelbasealloys.com who were fantastic to deal with delivering the alloys in record time. A JCW steering wheel is the only outstanding mod we have planned. Hope you like it. 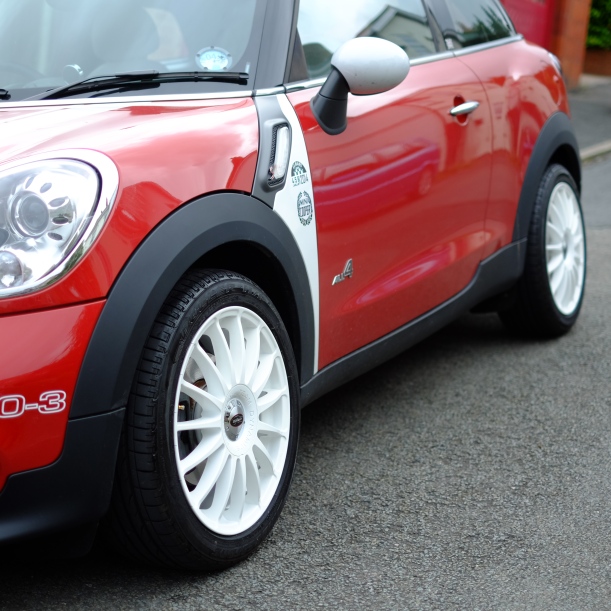 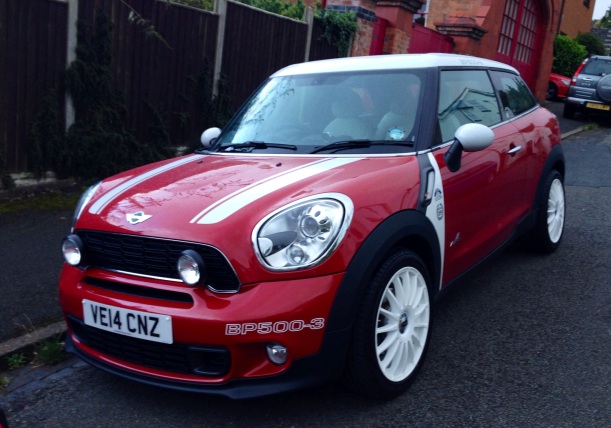 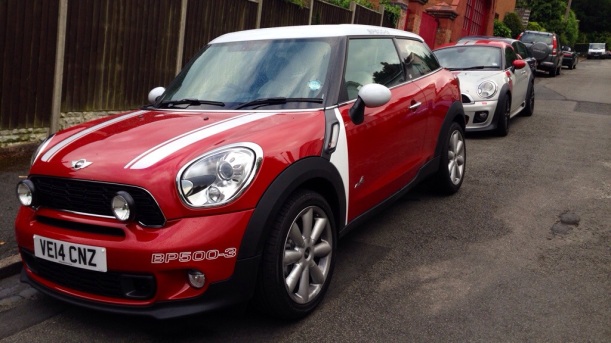 We collected our MINI Paceman SD from the dealer on Friday after a longish wait, whilst it was built. Both of us are really pleased with him, as he gives a different dimension to our cars. The Opel GT and the MINI Coupé are fast sports cars. The MINI Clubman S that this replaces was a fairly fast car but  in truth a poor relation to the Coupé. Similar in many ways but just not as quick. The Paceman is not tryng to be quick like the Coupé, but does what it does very well. It is a very comfortable 4 wheel drive 4 seater with an excellent semi command driving position and fantastic handling and performance for a car of this type. The above picture  shows the realistic offroading it will do, but it is great at this, while the rear wheel Opel soon skids away like a good un on the same terrain. Plus it is so low slung that we just don’t entertain it really.

It’s odd, but not only have we instantly fallen in love with this car, but it makes driving the other two even better somehow. Ok so the Paceman is a diesel and yes the engine can sound a bit harsh here and there, but it sounds kind of tough. Strong and reliable and as such it suits the bulk of this MINI. So there you have it PaceBeast, we love him. 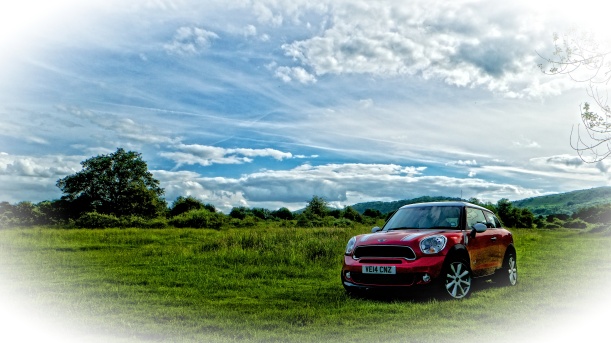 Our MINI Cooper S Clubman fondly named ClubBeast has done well over 5 years of sterling service for us and has clocked up over 68000 miles in the process. We have enjoyed many fantastic adventures with him including several European tours, including an epic Pyrenees adventure in 2009, the last French Weekender in Normandy in 2009, The Le Mans Classic in 2012, and the Paris Motor Show again in 2012. He began to take a back seat by the end of 2012 with the arrival of SilverBeast our JCW MINI Coupé who replaced CooperBeast who went to Peanut’s daughter, The Elf. END_OF_DOCUMENT_TOKEN_TO_BE_REPLACED