Sunday saw us at Chateau Impney for the 2015 revival of the Hagley and District Light Car Club sprint that was first organised in the chateau’s grounds in 1957. Myself, Peanut and The Elf were there and we were excited both to be visiting Chateau Impney and also to be in at the start of the revival of this event. Before we even arrived we followed a couple in their lovely red Triumph TR4 and the chap drove it with a delightful panache. Not crazy silly but nonetheless with flair and style which made it fun following in his wake to the hill climb. It is cars like that which excite me and I was looking forward to seeing similar road cars racing the hill.
The Chateau itself was built in the heyday of the British Empire and the motor car was becoming the fashionable accessory of the nouveau riche. Chateau Impney has developed a rich motoring heritage over the years, a tradition that began with the first sprint on 29 September 1957. The event was a roaring success, with Autocar magazine hailing the Chateau as “easily the most picturesque of this country’s sprint and hill-climb venues”, and declaring that “with a little skill and ingenuity applied to the road itself it will quickly rival the best of them”. The event continued for ten years coming to an end in 1967. In 2015, this historic motoring event has been revived for a modern audience and as said we were there to enjoy it and soak up the atmosphere.

The Chateau Impney Hill Climb saw no less than 200 competitors sprint their way up the challenging 1,000-yard course against the clock,including the famous Beast of Turin! It was a high-octane display of power, speed and skill and some of the most famous and successful competition cars that raced between the inception of the motorcar and 1967 were put to the test. The winner of the Hill Climb was awarded a prestigious trophy, commemorating the part that the Hagley & District Light Car Club played in Chateau Impney’s motorsport heritage. After wandering past some car related stalls on a car park between the field where we parked and the hill climb paddock area, we then spent some time at the entrance to the hill climb photographing the cars as they lined up to race the hill. The vapours from the petrol at this vantage point were positively intoxicating and we loved the smell it was so evocative of old cars and racing. I think at the time we described it as perfume!

This new MSA-approved course is double the length of the original track at a distance of 1,000 yards and to win the fastest time of the day, competitors had to navigate a number of challenging twists and turns at high speed before eventually finishing their climb at the Footman James Finish Line. During the course of the day we selected a number of vantage points to watch the racing, from just by the side of the chateau where we saw a number of cars nearly get caught out by the wet weather, to closer to the finishing line where we could watch a tricky chicane turn. Seeing and hearing the cars was quite wonderful and my favourite was a red Alfa Romeo GT Sprint. Again it is because I like the cars that look like you could use them daily on the roads. We were always drawn to the cars that looked like road cars from the 50s, and 60s but in truth all were a delight to watch.

It was good to being able to mooch about in the paddock areas where the cars were parked up prior to racing and undergoing last minute modifications here and there. Lunch saw us on the hill eating pork rolls and being treated to a spectacular biplane stunt display overhead. After lunch we did another tour of the paddock area and spent some time admiring the cars that were up for auction. Finally satiated with old cars we headed for home with me vowing to add more stickers and some spot lights to our MINI Coupe JCW! Mrs P meanwhile wants to do a hill climb! 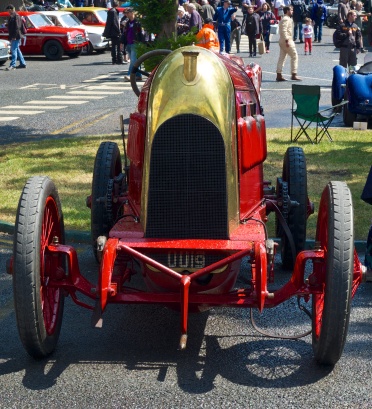 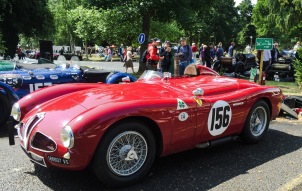 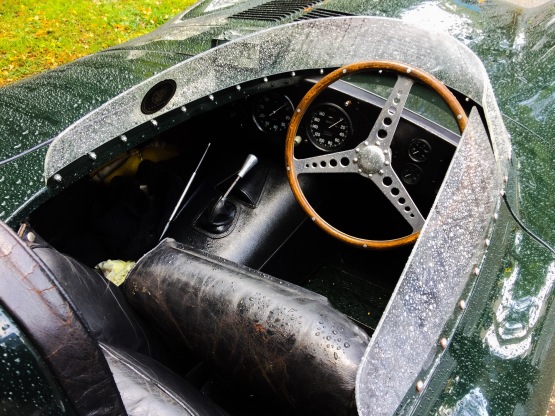 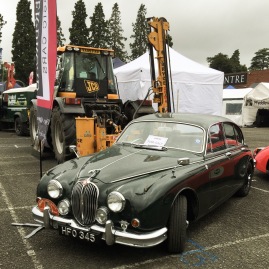