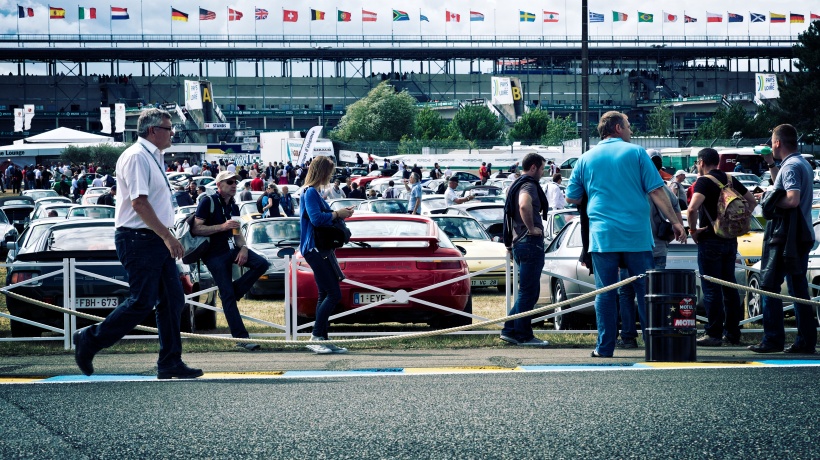 We had promised ourselves another trip to Le Mans Classic as we had had such a great time when we went two years ago. We were a bit late booking and there was nowhere close to Le Mans for us to stay, so we decided in the end to book a hotel in Bagnoles de l’Orne which is about an hour and a half from Le Mans but also a very pretty little town that we had stayed in before.

We started our weekend on Thursday with an overnight crossing from Portsmouth and we had a cabin with a window this time, which was quite a treat for us. It was a very calm crossing and we both had a good night’s sleep. We had a well organised exit from the ferry and started on our way about 7am.

We stopped off on the way for breakfast and then carried on to Le Mans. There wasn’t too much in the way of queues and we were soon parked up, it was a beautiful day, in fact it turned out to be the best of the three. After ambling around for an hour or two we began to feel a bit peckish and we found a spot near the Morgan stand for a cheeseburger and chips and if not a bargain, it was a great deal cheaper than some of the other places.

We got chatting to some Morgan owners and admitted shamefully that although we live in Malvern we don’t own a Morgan. Some more walking, a spot of watching the racers practising and then at about 4 o’clock we felt we should go and find our hotel. By the time we got there Mrs P had an awful migraine which had been brewing all afternoon and she felt so wretched that I had to find a meal for myself and eat it alone – a very poor state of affairs.

The next morning she felt quite a bit better and we had a leisurely breakfast and made our way back to Le Mans. Again we took a relaxed tour of the grounds and enjoyed exploring the many stalls. There were some very tempting holdalls at not very tempting prices but in the end we settled for a few momentoes of the race such as a key ring and some decals for our new Paceman, and a small clock for the Coupé. We watched the Porsche owners take their babies out on the track and made a promise  to ourselves that if and when we get ours, we too will take it round Le Mans.

Mrs P took the opportunity of trying a Porsche for size later and learnt the importance of choosing the right seats as some of the sports seats cannot be raised. That is not a satisfactory option for the smaller lady.

Lunch beckoned and we made our way back to the burger joint we had used yesterday but the queues today were massive and I was very hungry and tired. So Mrs P joined the line to pay and it soon became obvious to her that the burger queue was very slow, and this was after you had waited to pay. So she opted for a hot dog as that was a much shorter wait. On the face of it this seemed a good idea but the hotdog turned out to be one of the most awful things we had eaten in a long time and probably not properly cooked either, something that came back to haunt us both later, although the wise Mrs P only ate half of hers!

So we left there not at all satisfied and feeling vaguely queasy. After a bit more of a walk around we decided to go back to Bagnoles as my feet were getting very sore. As we headed home the weather looked grim ahead and sure enough after about 30 minutes the rain started. It poured and lashed down in torrents, so much that cars were pulling over on the road and one had even slid into the ditch at the side. We had thunder and lightening, the full hit. We were very pleased that we had left Le Mans when we did as it was heading their way and it was not a place to be stranded in a deluge. Back at the hotel we treated ourselves to a lovely bubbly bath and had our meal in the hotel restaurant which was very pleasant and had a lovely view.

The next day it was a wet start but we made the effort to go to Le Mans again, and we were glad we did as it was much better weather when we got there.  By now we had seen everything there was and as there were no seats and the grass was too damp to sit on, our stay was quite short this time. We returned to Bagnoles for a late lunch and explored the shops, had an ice cream and walked round the park. it was a beautiful afternoon and indeed the whole weekend had been a great break for us.

We packed up and left Monday morning, heading up the motorway to Calais and the tunnel. It’s always exciting to drive these roads with others who are also leaving Le Mans and if you set your speed right you get to overtake all sorts of interesting acts on the way home. The only downer of the whole weekend was that we managed to pick the day the Eurotunnel broke down to go home, so we had a four hour wait at Calais. But the weather was gorgeous and we were surrounded by nice cars, life was good and Mrs P was by my side where she belongs. 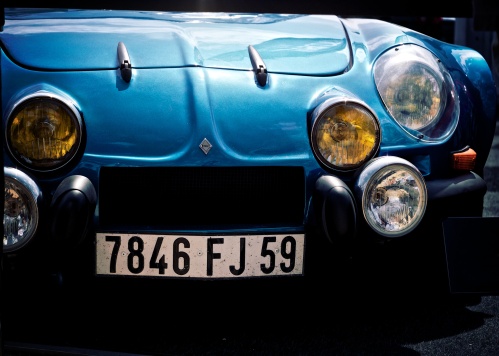 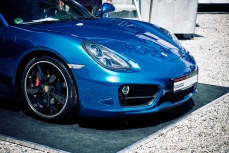 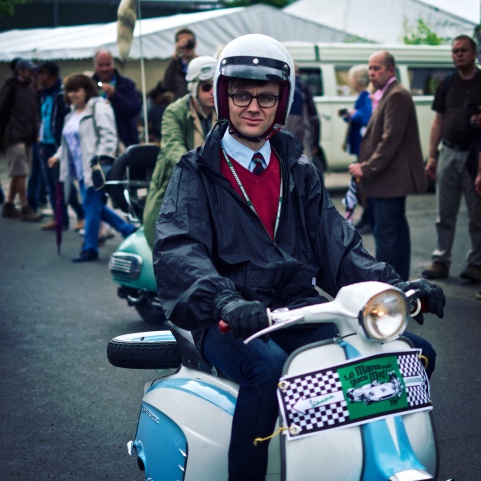 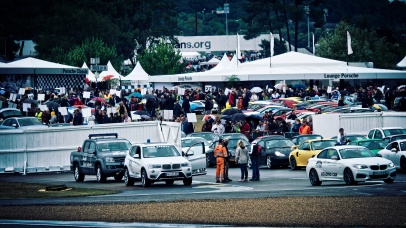 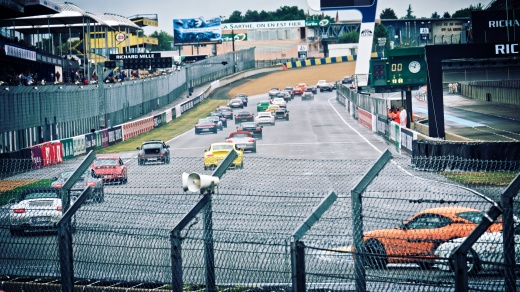 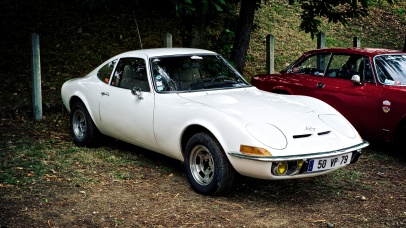 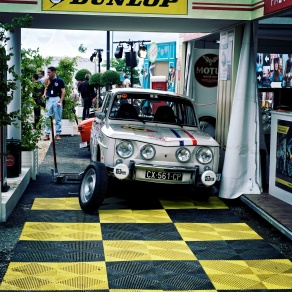 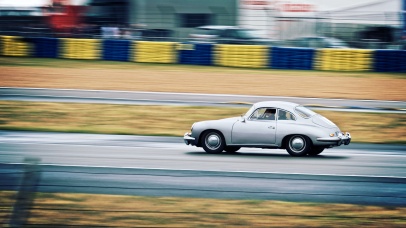 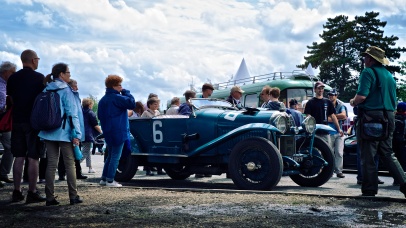 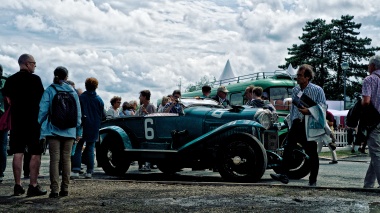 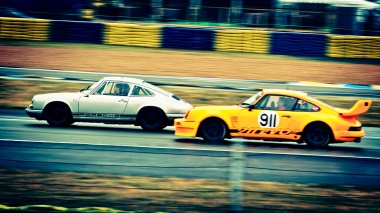 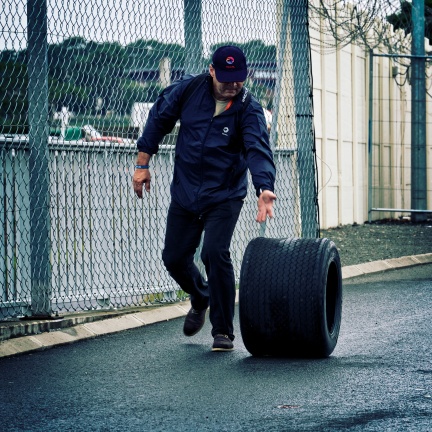 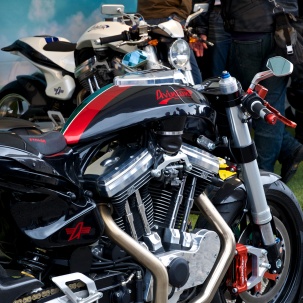 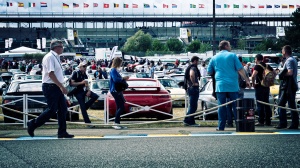 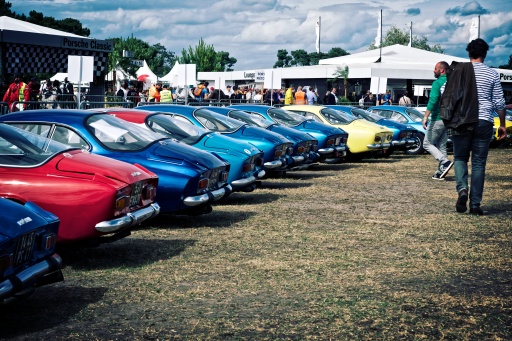 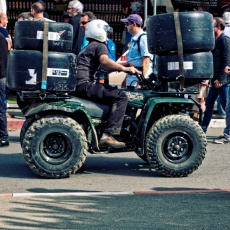 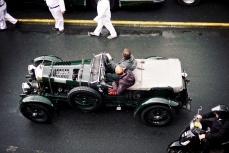 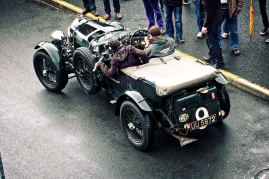 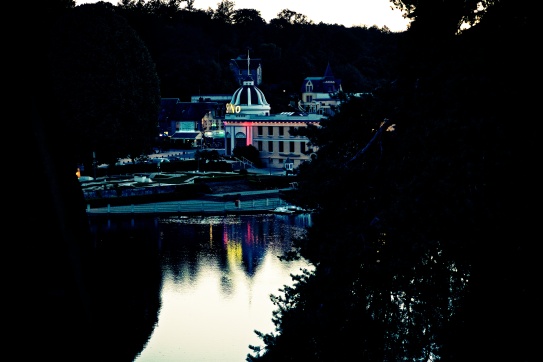