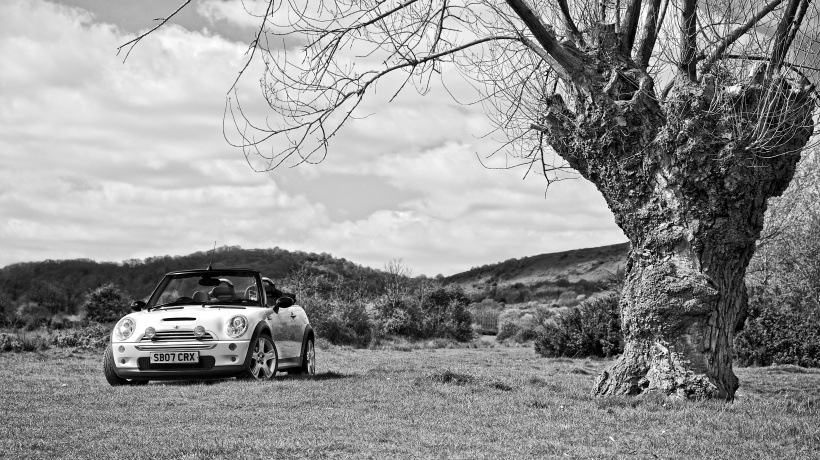 A pal of mine from work Andy, recently bought this generation one MINI Cooper S Convertible and before he did he rang me to ask what I thought. Well clearly then he was smitten by the car so  he rang the one person he knew would just say, “Yep great car just go for it!” Soon after he bought it I gave his daughter a lift home and was greeted by Andy, keys in hand chomping at the bit to give me a test drive of his new MINI. I grabbed the keys, adjusted the driver’s seat, noted the GPS where the central speedo usually sits and that I had both a speedo and rev counter sat atop the steering wheel. I fired her up and  instantly remembered that this was a first generation MINI, one with a supercharger. These are exciting cars to drive.

With Andy in the passenger seat we ambled off the drive, poodled down the road, letting the engine warm up and then I let rip from a standing start immediately pulling onto a main road turning left. Supercharger screaming, traction control light flashing, heart pounding and I was in car Heaven! This wasn’t about doing anything well this was about having fun. I used to have a GEN 1 JCW Works and I had forgotten just how addictive the supercharger is, you just want to hear it kick in and wind up. It is nigh on impossible to drive these cars without giving them some serious stick, they love it, they seem to beg for it, it is as if some part of the car sits on your shoulder and whispers in your ear, urging you to put your foot down. What fantastic fun that drive in Andy’s car was. 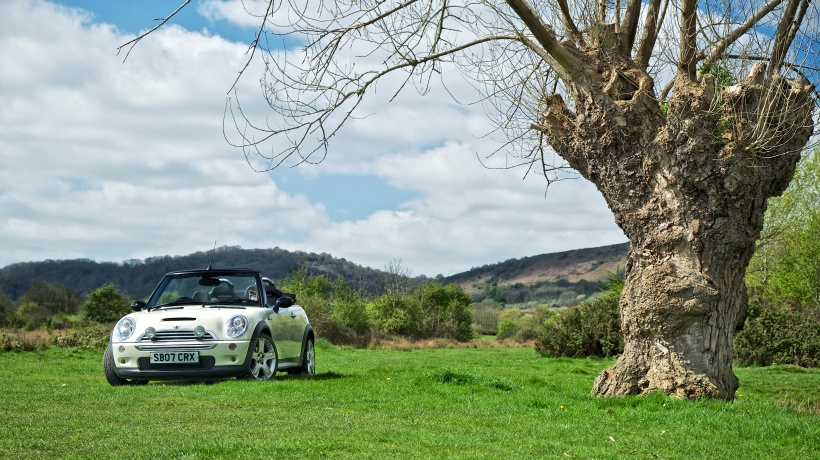 These days I drive a JCW MINI Coupé and as I drove home after driving the supercharger, I started to think about the two cars, one supercharged the other turbo powered. The JCW Coupé is in truth a much quicker car, it’s a JCW for a start and it is devilishly quick, has a great exhaust noise is much much better planted. It too is a hoot to drive but at the same time it is a bit more grown up, more sophisticated. You can see in truth that in just about every way MINI have improved the car and in Coupé form especially the MINI just seems so focussed and purposeful. Built for speed and fun. Game over then – a Supercharged MINI is fun, but it is yesterday’s car and the new Turbo cars are what you want!

Er… Well no not quite. It is just not that simple. The Coupé is rapid, it really is, but there is not the same amount of drama when you put your foot down. Sometimes, you barely notice, but you have shot from 30 mph to 70 in a flash, effortlessly but without Tchaikovsky and the band blasting out the 1812 overture – the moment lacks something. It’s hard to put it into words but here goes. Poodling in 5th in the Coupé at 30, dual carriageway arrives, put foot down, you are doing 70. Poodling in 5th in Supercharged S at 30, you spot dual carriageway ahead, you drop to 3rd, hit the accelerator, the supercharger kicks in with a vengeful whine, you watch the rev counter swing round to 6500 revs, you hit 70, change up, let off and listen to the exhaust pop and gurgle as you let off the gas. Tchaikovsky at this point was setting off his canons.

Simply put then, I’m partial to a bit of Tchaikovsky and the supercharged MINI gives you an 1812 overture every time you drive it!

Also, in truth I’m a joe average driver, lazy sometimes. Sure on European trips or with extended driving I sharpen up, get focussed and start to get the best from the car. But sometimes, I find in the Coupé, when I overtake a car in third, I slam my foot down hard, too hard and find I have hit the rev limiter halfway through my overtake. Eek! It all comes round just so incredibly fast. With Andy’s supercharger, you had that bit more time, you could see the rev counter spinning round to the red line, just as you move back in after overtaking and could take joy from smoothly changing up just when you want to, easing back and then listening to the pop pop pop of the exhaust knowing that this is what the car you have overtaken is listening to. This MINI Cooper S Convertible then is rightly my Car Of The Week – what a hoot.

A few weeks later and the car is back with me for a fortnight while Andy is on holiday and I really got to have some fun driving BorrowedBeast as I chauffered Andy’s daughter Laura back and forth from home to work. By then though the damage had been done! You see after that first test drive of his car I was once more smitten by the supercharger. Don’t get me wrong, the JCW Coupé that we have now is the most fun MINI we have ever had, it just feels so right for us, but yep superchargers are immense fun too. Consequently, I came home and searched the web looking for gen 1 MINI GPs. Mrs P, was looking over my shoulder and seeing my enthusiasm. She did nothing to dampen it, but just slowed me down gently. A week later we called in at our MINI dealership just to see the new F56 MINI, which by the way we were very impressed with, but it wasn’t for us. Then we saw some second hand Pacemans on the forecourt and liked them and the price. We went home and I had Pacemans and GPs on my mind. Peanut though had Pacemans on hers and after chatting I agreed that we had two fast cars, we did not at this point need a third, we needed a counterpoint a practical one that could replace our tired MINI Clubman and maybe get up the hill to where we live in the winter snow and ice. We tried to buy the second hand Paceman but it had sold in the three days we pondered, so in the end we ordered a new one. And that all came about because of the fun we had in BorrowedBeast. Not really logical I will concede but in truth we don’t really need too much logic in our lives.

Anyway, if you are in the market for a fun car, but your budget is not for a new car, look at a Generation One Cooper S. The convertibles, such as this late one still cost a few bob but older hard top ones can be found for half the price and really are a hoot to drive. Go on make it your business to go out and drive a car with a supercharger on.